Meme Magic and the Cult of Kek 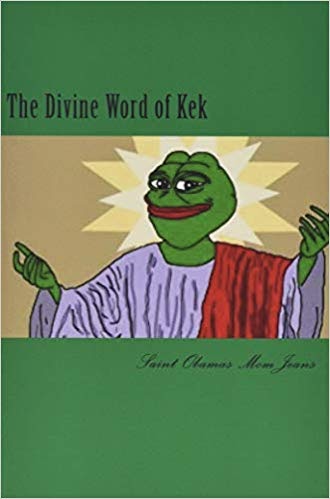 Pepe originated in the comic called Boy’s Club, by Matt Furie, who ended up suing infowars in June of 2019 for selling posters with pepe and other alt-right figures, for $15k. Pepe steadily grew in popularity on sites such as Myspace, Gaia Online, and 4chan back in 2008. By 2015, it had become one of the most popular memes used on sites like Tumblr, and especially 4chan. Pepe was used with Donald Trump imagery during the 2016 election, along with multiple accounts of alt-right and nazi imagry, which caused the adl to classify. It was during january of 2017 that kekistan was “founded,” but the name had existed as early as 2015. Things picked up when a 4chan user came across the frog-headed ancient egyptian chaos deity, Kek. the word “kek” has two “sources” of origination; the first because korean wasn’t supported on Blizzard’s 1998 strategy game Starcraft, so the korean spelling of “hahaha,” ㅋㅋㅋ, was written as “kekeke,” which became an in joke to non-korean speakers, and shortened to “kek.” kek is also found in world of warcraft; If a horde member said “lol,” it would be translated as “kek” for alliance members. 4chan adopted the word and used it along with alt-right pepe’s; but the discovery of the eqyptian chaos deity strung the whole thing together. A frog headed deity of chaos with the name of a word that had already been associated with the alt right, all in all, a perfect storm.

It was January 30th, 2017, that YouTuber “Sargon_of_Akkad” tweeted “shitposters meet the British govs criteria of an ethnicity,” claiming he would register the group on the British census. After asking followers what the ethnicity should be named, he settled on “Kekistani,” describing the fictional group as a “disparate and dispossessed people.” it was then that the movement was truly founded.

They used the flag’ the first example of the term kekistan’ which was based off of a nazi war flag, but green instead of red, and a kek symbol replacing the swastika.

There have been several books written, namely by “Saint Obamas Momjeans”  the “patron saint of the god Kek,” and “the first scribe of the holiest Kekism religion;” such as “The Divine Word of Kek,” “Deus Kek: The Kek & The Dead,” and “Advanced Meme Magic.”

“Meme magic” is referenced quite commonly throughout kekistan relations; the term originated from 8chan, and has gained popularity on 4chan‘s /pol/ (politically incorrect) board, used commonly with several “shitposting fads,” including Ebola-chan, Baneposting and Donald Trump. It’s been compared to the occult concept of the egregore, an autonomous psychic entity which influences the thoughts of a group of people. A notable example being Ebola-chan an anthropomorphic representation of the Ebola virus, claimed to have helped the spread of the virus via memes on 4chan, hence “meme magic.”

Another example would be Winter-chan, an anthropomorphic representation of winter. The character was used to express the response of right-wing Europeans to those fleeing the Middle East during the European Migrant Crisis. The idea was that Winter-chan would be a manga character would be used to summon a cold and harsh winter, in the way that Ebola-chan was believed to create a more powerful epidemic. The harsh, cold winter summoned by the Winter-chan would be painful, or fatal, to those fleeing the Middle East.

The movement has since died down, but it seems that members are getting desperate ro “make [their] GREAT nation relevant again.”

And that’s what they are, desperate for relevance, for attention. That seems to be the whole point of it, to “troll liberals,” to ridicule them for “taking [their] religion seriously.” because it isn’t serious, it’s satirical trolling in an attempt to get attention. The problem being what they do to get attention,what’ll they do next to make their “great nation” relevant? They’ve tried to take credit for the pepe’s in hong kong; as pepe has since been used as a symbol for the Hong Kong protests, kekistanies claim it to be the work of fellow kekistanies, that the protesters are a part of the movement as well. This has gone unnoticed, however, and hasn’t brought any attention back to them. It’s safe to assume then, that they’ll continue making bigger claims and making bigger attempts to bring attention upon themselves, until they succeed. Their best bet could be to try to replicate their previous success, so it’s likely there’ll be at least a slight resurgence during the 2020 presidential election. But that’s just hypothesis. They might not come back at all. But if they do, it’s best to be aware of it. Keep in mind that something might happen. Taking whatever form of action might not be a choice for long.