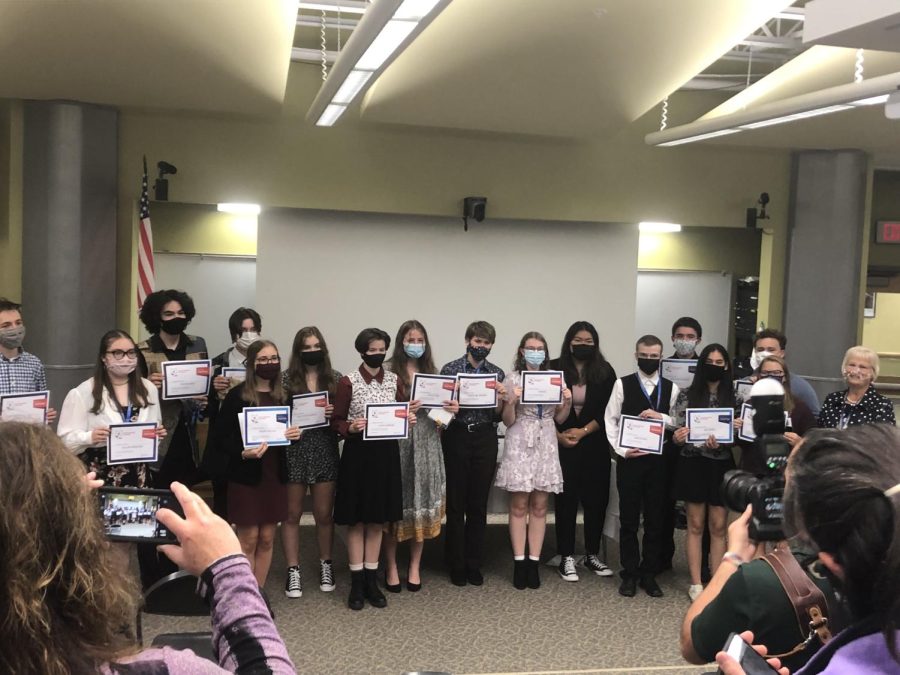 On the lovely day of October 4th, 2021, the French Honors Society, led by Mrs. Jakki Therrien, conducted an induction ceremony for the new members. The semi-formal event took place in the Oakmont’s Von Deck Lecture Hall at precisely 6:30 pm. The new inductees beamed with pride when accepting their French honor.

The night kicked off with a speech from Principal Lizotte. He spoke, mentioning his family background, growing up in a French-speaking household, and the French influence on his life. Then, Mrs. Therrien spoke, answering the question, “Qu’est-ce que la Société Honoraire Francaise?” which means “What is the French Honors Society?”   She mentioned the Society’s origin and where it all began in 2016. She also shared the dedication and the route ventures of the FHS, such as tutoring and bake sales to raise money. Once Mrs. Therrian’s speech was over, everyone, the parents along with the society members, stood up to sing the French national anthem titled La Marseillaise. Everyone was given lyrics, so the members read and sang, while the parents tried to follow along the best they could. Once everyone sang, the French Honors Society president, Ana Grimes, spoke about what the Society has done this past year and the plans for the future. After her brilliant speech, came the ones about three different French-speaking countries: Belgium, Algeria, and Haiti.  Abby Mullhall spoke about Belgium, Emma Yoder spoke about Algeria, and the FHS secretary Jonathan Rossignol spoke about Haiti. Haiti has been going through very challenging times these past years, so the fundraising that is done throughout the year goes to Haiti.

Once all of that had finished, it was time for the official certificates, starting with the second-year members. Eight seniors and one junior stood up and received their certificates, all of their hard work paid off. After the second-year members received their certificates, it was time for the new ones. One by one, nine juniors also stood up to receive the first-year certificates for the society. Once that was over, each member, new and second year, stood with a candle in hand and recited the French pledge of allegiance.  Normally, the members would eat crêpes by candlelight with their families, which is a tradition in France. However, due to the pandemic that could not be done, so they sent everyone home with a recipe for crêpes and encouraged all of the families to eat them together by candlelight at home. The ceremony was live-streamed on AWCATV. 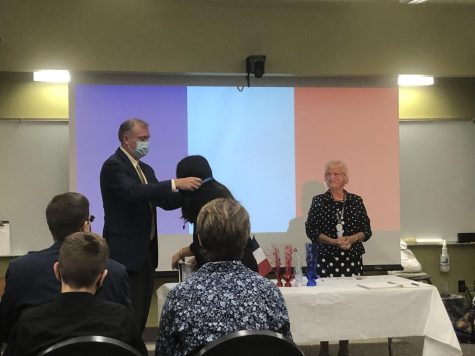